skip to main | skip to sidebar

Kemmanagundi literally means "pit of clay" which might not sound very interesting but trust me, it is one of the best kept secrets of Karnataka. There were around 5-6 bikes planned for this trip but as usual many backouts and we came down to two and no points for guessing me and Ashu.

We met at MG Road at 6:30 AM and he was with a pillion, Ajeet. Soon we were inching towards Neelmangla through heavy truck traffic. Tank up at Shell Petrol Bunk and we stopped for breakfast at a dosa joint. Road was good, weather was perfect and we took next stop after 100 km and had some fresh juice. I glanced at my wrist watch and a smile came to my face. We were just 40 odd km from Hassan and it was not even 11 AM. Good we were on schedule. We soon crossed Hassan city and took the road to Belur via Halebidu. There was a big pothole on the road and my speedometer cable snapped off due to that jerk :(. Though road was not one of the best but I loved the route. Soon we were in Chikamaglur and we stopped for lunch. Vegeterian it was. You see navratri and all :). We had barely moved 5-6 km from Chikamaglur and it started raining. We had to wait at a small shack as neither Ashu nor Ajeet had any rain protection. "Necessity is the mother of all inventions. This was proven true with these raincoats. Cost Rs 8/- per piece :). A shorter but bad road route to Kemmanagundi is if you take a left turn after some 8 km from Chikamaglur but we chose the longer but good tarred road route. The roads were amazing and rain kept us company almost throughout . We reached Kalahatti falls at around 4 PM. We were slowed down substantially because of rains. By the time we reached Horticulture Department Guesthouse, sun had started turning red.

Now the difficult part. We had tried booking the guesthouse over phone from Bangalore but no one picked up the phone and like we feared there was no room available. I must tell here that there is no other place in Kemmanagundi to stay apart from this guesthouse unless you want to spend some quality time with big cats of the jungle :D. After some persuasion and negotiations, we finally managed to get a room with dirty sheets and damp beds :(. Thank god we carried our sleeping bags. No electricity and we had a candlelight dinner at the canteen. Walked back to our rooms and retired.

Next day morning, my shoes were still dripping so I wore floaters. We rode out towards Z-point. It was all muddy and slushy with last day's heavy rains. We went as far as our bikes could do, clicked some photos and returned. Spectacular views! There wasn't any time to trek till Z-point. Maybe next time. We headed towards Hebbe Falls. After diverting from the Chikamaglur road towards Hebbe falls, we could see the landscape changing from green to brown. It was a mining area and we could see that in the dark coloured soil. After sometime the real bad jeep track started. Hebbe falls is some 8-10 km from this point and it took us almost an hour to cover. The track looked like a seasonal waterway which was used as road when there is no water in it! I doubted whether my bike would be able to take on it but it was a pleasant surprise :). After reaching the foothill, there was a small walk till we reached the waterfalls. We had to cross few streams and on the way I noticed that my feet were infested with leaches! I could see stains of blood on them. I washed my feet and floaters throughly in the water and moved on. Hebbe Falls. What a sight! We spent some time admiring and clicking the waterfalls and soon were back on track. We wanted to reach Baba-Budayangiri by noon. The ride towards Baba-Budayangiri was full of spectacular green hills and twisty roads. And ther trafiic was so low that we were wondering if this was the correct road! We stopped at this spot which looked like just taken out from windows XP wallpaper! I had never seen anything so pure green and blue! We stopped and clicked loads of photos there. By noon, we had taken the diversion and were climbing towards Baba-Budayangiri. This road was smooth and quite steep. It felt like top of the world from B-Top! The beautiful green valley below with clouds shielding sunlight at some spots was just fantastic. But we had to move on and we did. The roads deteriorated further. The soil is very clayey and it was damn skiddy after rains. But we were out of bad roads and into Chikamaglur by 4 PM. Lunch time!

After having some chicken biryani, we started off for Bangalore at around 5 PM. It was hardly 10 mins on the road and it started raining heavily! We immediately took shelter under a shed. We waited for more than half an hour and there wasn't even slightest hint of rains slowing down. We finally decided to push off at around 6.

As we moved towards Hassan and then to Bangalore, there was no sign of rains slowing down. Though I had a rain proof jacket, I didn't have rain proof pants. We were chilled to bone riding for 150 kms in rains !! Due to heavy rains and headwind, visibility was very less and we could not go past 60 kmph. Finally some 100 km before Bangalore, we stopped for garamagaram chai and changed to dry clothes. What a relief! The rains were now just a drizzle and we just wanted to reach Bangalore as soon as possible. With non stop riding, we managed to enter Bangalore at around 1 AM. Due to less speed in rains, I got a whopping 47.5 kmpl of average!

Reached home at around 1:30 AM, took a hot shower and crashed on the bed with a content smile. I just visited the most beautiful place in Karnataka! More pics can be seen here

Sainis'......Finding happiness in each other said...

Toooo gud as usual. I think this is one of the best written of ur blogs. Chamoli saab, u do a grt job.

Nicely covered ride, n loved the pix. I am getting an inspiration to update my once-upon-a-time rides on my blog :D :P

Ashu said...
This comment has been removed by a blog administrator.
4:42 PM

Amazing ride and VERY VERY WELL COVERED.. with some REALLY GOOD photos..
Visibly PROFESSIONAL in everything he does, here is another GOOD ONE from the ASHISH stable (garage, if u may!!)

Just stumbled upon your blog today while checking out rides out of bangalore.

Was good to see you visiting so many places which I can only wish visiting.

Well, needed some info from you. Incidentally, i was plannin on buying a bajaj avenger and was lookin out for some reviews. Now i feel that the best person to talk about the bike before i buy it, is you. Coz all your travel on it....well it would be nice to chat with you especially abt the bike and your trips. Please let me know at kc0108@ymail.com

You rock man... posts where very nice. I just need to talk to you regarding my plan to buy a new Avenger. As you ride a lot, I feel you are the right person.

Can you please give me your id to have a chat. myn is, karthick.sm@hotmail.com

AMazing blog ... I am getting an avenger very soon and seeing this blog makes me very happy. You pen down your experiences very well.

u4yeah.blogspot.com; You saved my day again.

hi dudes. I'm honestly into shoes and I was searching for that singular make. The prices due to the fact that the boots are around 300 bucks everwhere. But finally I set this area selling them as a remedy for half price. I absolutely love those [url=http://www.shoesempire.com]gucci sneakers[/url]. I will absolutely buy those. what do you think?

Unknown said...
This comment has been removed by the author.
5:40 PM

Hope it was Amazing trip. But Road was not good . Is Bike Riding comfortable? 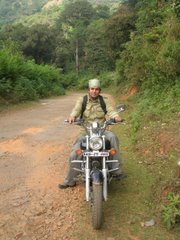